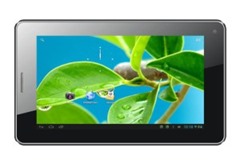 Remember that $35 tablet from India? Datawind, the company that manufactures it, is going to bring it to the USA. In fact, it’s bringing three versions of the tablet: an el-cheapo version for $38 that’s basically a 7” tablet with WiFi, an $80 version that has the same specs but adds 2G EDGE cellular browsing (and you can add one year of basic browsing for $20 more), and a $150 version with improved specs and 3G HSPA browsing capability (and the same $20 for one year of browsing offer).

I can’t see the $80 and $150 versions of the tablet making waves here when you can get so much better devices for just a little more, or even a little less. (Heck, even the Nook HD is better than the 3G7 in terms of resolution, processing power, and memory, though it doesn’t have the 3G, GPS, or cameras.) But that $38 tablet…well. As I said for the $50 Office Depot tablet, if you literally cannot afford anything better, a lousy tablet is a lot better than no tablet at all.