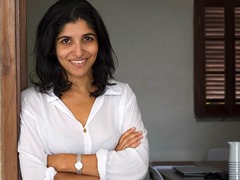 E-books have had a hard time in India, what with e-tailer Flipkart exiting the business when its attempt to sell e-books fizzled. Amazon has been looking into expanding its presence there, but it’s not the only one who thinks it can make a business out of e-books in India. The Hindustan Times reports on Rudrani “Chiki” Sarkar, former Bloomsbury and Random House India exec, who has launched a new publishing startup in Delhi that plans to rely on e-books.

Sarkar’s startup, Juggernaut, plans to win the e-book battle in India by relying on aggressive pricing and a sense of community. Unlike India’s prior e-books, which were only 15 to 20% cheaper than their paper counterparts, Juggernaut’s e-books will be sold at half the price of physical books, and read via the smartphone app it just launched. (A desktop reader will be coming later.) It will also be publishing short stories and longer works written by locally renowned writers and actors. readable by subscription at a rate of 15 Rs (US 23 cents) per day, or 299 Rs (US $4.50) per month.

In a Business Standard piece from September, Sarkar explains that the smartphone could be the one computerized device many Indian citizens will own, which means it’s also the place those citizens will read.

Phone publisher, what’s that, you ask slowly, and Sarkar is off and away. “If India is going to live on the phone, if we’re going to become a one-device population, then Indians will also read on the phone,” she declares. “The e-book,” she continues, “is literally a physical rendering of the book in electronic form, and too static. I’m saying, can we talk to this new mobile audience differently? Can we create a reading experience tailor-made for the phone?”

She’s looking into ways of making bite-sized content available for reads on long commutes, waiting in line, traffic jams, and other such situations. She suggests each chapter could be considered “almost as a TV episode,” which puts me in mind of Western startups like Serial Box and Pigeonhole aiming to do the same thing.

Juggernaut will have a community platform where authors and readers can interact, and would-be writers can submit their writing for consideration by the publisher. Sarkar compares it to the writing community around Wattpad, but it sounds kind of like Baen’s Bar to me. In any event, as publishers like Baen have shown in the West, building a community can be a good way to connect with readers and sell more books—and as less-expensive smartphones find their way into the Indian market, the potential audience for Juggernaut should grow further.

If Juggernaut can get it right—especially where the price point is concerned—then the burgeoning smartphone audience in India should serve its needs well. After all, people do like to read on their smartphones these days. It’s going to be interesting to see if Juggernaut can succeed where Flipkart failed.