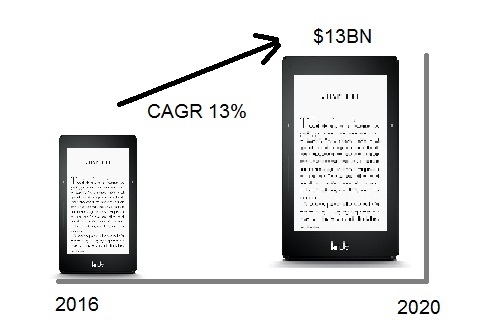 Fed up with those Big Publishing-backed reports of shrinking ebook sales? Fancy some more independent insight into the actual rate of U.S. ebook market growth outside the shrinking domain of the Big Five? If you do, you’ll be well rewarded. Technavio Research has just released a report, titled “E-book Market in the US 2016-2020″,  which predicts “the e-book market in the US to grow at an impressive CAGR of approximately 14% until 2020,” reaching a striking dollar market size of $13 billion. That’s a dramatic contrast to the Big Five-led narrative of stabilizing or even contracting ebook sales.

Technavio’s exact methodology on the report isn’t clear, not least as the company is coyly hiding most of the text behind its paywall, simply claiming that it has been “prepared based on an in-depth market analysis with inputs from industry experts.” All the same, it’s reasonable to assume that Technavio is not simply plucking figures out of the air, not least as the blurb explains that “the key vendors analyzed in the report are Amazon, Apple, Barnes & Noble, and Kobo.” The full press release introducing the report is available here, with a more detailed breakdown here.

Technavio continues: “The rising penetration of smartphones and e-readers is a critical factor that propels the growth of the e-books market in the US as these devices act as an effective platform for the wide-scale adoption of e-books. Furthermore, the availability of an extensive range of e-books and efficient pricing policies by vendors will lead to the substantial growth of this market during the forecast period. Additionally, the introduction of government initiatives, such as the Open eBooks initiative, will aid in the growth of this market until 2020.”

Presumably, the efficient pricing policies mentioned don’t include the Big Five’s recent pricing models, which have so effectively helped drive their sales down. And this report suggests that other publishers – and self-published authors, presumably – will simply grow past them.

There are other interesting factual nuggets in the report, such as “the nonfiction e-book category dominated the market in 2015” with a market share of just under 40 percent by value. But it’s those headline growth figures that are the most significant – and that most emphasize the need for truly independent analysis of the ebook market, rather than skewed numbers from special interest groups.