Yesterday, The Telegraph reported that digital sales of fiction titles in the UK were up an impressive 188 percent (by value) in the first six months of 2012, when compared to the same period last year. As for digital sales of nonfiction e-books, they’ve raised 128 percent in the UK. Sales of children’s e-books, meanwhile, have increased 171 percent.

Also yesterday, The Guardian published an interesting piece about the e-book price war currently underway in the UK. Some ebook discounts from Sony and 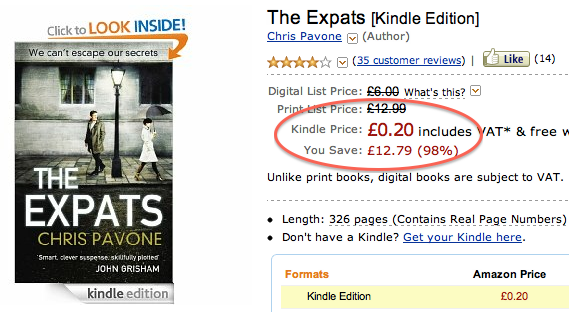 Amazon have reached as high as 97 percent, including digital fiction titles from authors including Jeffrey Archer and James Herbert, which are being sold for just 20p ($0.32) at amazon.co.uk, as well as at the UK version of Sony’s Reader Store.

Author Peter James, who also has a novel going for just 20p in the Amazon UK Kindle store, is interviewed in the Guardian piece; he refers to himself as “a really happy bunny,” because he’s “still getting royalties as if [his books] were [being sold at] full price.” At one point during the promotion, James was selling 10-20,000 books each week.

Of course, you can only offer 32 cents ebooks to readers for so long before they start becoming accustomed to the low price, as the following paragraph from the Guardian story points out:

[Author Peter James] feels that while the [20p] offer is attractive in the short term, “it has a lot of long term dangers”. “What’s worrying is that the 20p price point sets a precedent. The public starts getting used to paying even less,” he said. And unable to compete on price, the sector of the market that will “lose out in the long term is the independent bookshop,” believes the novelist. “That’s my biggest worry.”