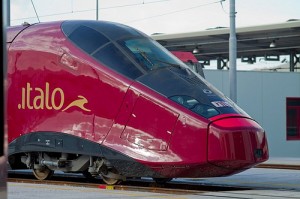 If you’re the type who regularly follows international news of the ever-expanding e-book scene, you may have already heard about the unusual business collaboration between the Italian book publishing company known as RSC Libri, and the Italian train company, ITV.

The partnership, which was announced at The Bookseller’s FutureBook 2012 conference in London, and which has been dubbed E-books Aboard!, “will give passengers on Italian trains free access [to] e-books,” according to The Bookseller. The general idea, as the post explains, is “to study the way consumers read and discover digital content.”

Assuming the experiment leads to any particularly eye-opening findings, it’ll probably be a safe bet to assume that RCS Libri–or perhaps its parent company, RCS MediaGroup (which is affiliated with Rizzoli in the United States)–might soon begin to offer some sort of e-book discovery tool, or perhaps even a new digital reading device or application. Regardless, forward-thinking digital publishers based Stateside would almost certainly be wise to keep an eye on RCS MediaGroup over the next year or two; they are obviously taking a very close, hard and serious look at the future of their own industry, which is, in fact, still very paper-based. (For now, at any rate.)

Paid Content’s Laura Hazard Owen reported on the project last Friday. As her post explains, “The e-books are available on [ITV’s] Italo high-speed train line. Passengers,” she continues, “can read [the e-books] through on-board devices or stream them from a website on their own tablets, laptops or smartphones. The program, in a beta test now, will expand in 2013.

As for those “on-board devices” Owen mentions, the photo on the left shows an example of the screen itself. (The photo on the right, meanwhile, shows the backside of the device and its positioning on passengers’ seats.) To me, the screens look very similar to pretty much any average on-board media device you’d have access to on an international flight, and I’m sure that’s no mistake.

According to an early-December article about the project on The Bookseller, 340,000 daily commuters will technically have access to the free content.

“The aim, said [Marcello Vena, RCS Libri’s director of digital products], was to enable publishers to achieve ‘discoverability 2.0, where we can learn about readers’ habits and can have direct engagement, rather than just broadcasting to them.'”