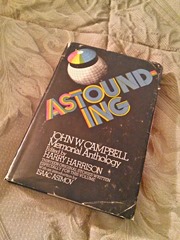 A few days ago, I recalled a short story, called Early Bird, by Theodore R. Cogswell and Theodore L. Thomas. I wanted to share that story with a couple of friends and co-writers on a shared Internet fiction setting that uses a number of the same tropes. So I went to see where I might find it. And the answer was…nowhere.

Well, not completely nowhere. It was published in one single place: a 1973 anthology honoring the late John W. Campbell. I couldn’t find it online anywhere else—not for sale via Smashwords, not published in a magazine I could find from a library database, not even on the Pirate Bay. It couldn’t be found. I finally ended up ordering the book used from Amazon, scanning the story into a PDF, and linking it to them to read that way.

Yes, sure, you can argue that it was “piracy.” But what alternative did I have? Even if I’d ordered a hard copy of the book from Amazon to be mailed to them, since it’s no longer in print the authors or their estates wouldn’t have seen a penny of it anyway. I’d just have enriched Amazon, the post office, and whoever was selling it (but given that it was selling for a penny plus shipping, mostly Amazon and the post office).

And there’s basically no possibility of getting the book as a whole in e-book format, either, even if I clicked the “Tell the publisher you want it” button. It’s an anthology. And anthologies are special beasties. Each short story is basically purchased for as long as it takes to keep the anthology in print, then it goes away forever. Republishing the anthology isn’t just a question of negotiating the rights to one book from one author. Using this anthology as an example, it’s negotiating the rights to 15 works from 14 authors (or their estates). For the sake of one book? No publisher will find it worth the trouble.

I wanted to do the right thing. I looked everywhere to see where I could buy it. If it had been available on Smashwords, for example, with their “pay for extra copies and gift it to your friends” policy, I’d happily have done so. But when it’s a question of doing it or not, and the authors not getting any money either way—well, why not?

(I’d be happy to kick in a few bucks directly to the estates of Cogswell and Thomas, who are both deceased, if they want it. If representatives from those estates are out there, please let me know if you take PayPal.)

So what can be done about works like this? They may or may not be “orphan” in terms of being able to contact their rights holders…but if nobody gives enough of a damn to want to bother contacting those rights holders to republish them in the first place, they’re not going to be available until Disney finally gives up its lock on the public domain. If that ever happens.