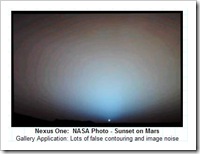 Wired’s “Gadget Lab” blog links to DisplayMate’s blog entry comparing the LCD of the iPhone to the OLED of Google’s Nexus One.

It turns out that the Nexus’s OLED is found wanting, featuring a good deal of posterization and artifacting. In a picture of a Martian sunset, there was a great deal of false contouring and image noise, but the iPhone display was “the same as it looks on a studio monitor.”

The implications for pictures are obvious, but what about text? Though the test does not get into this, part of the use of the same kind of dithering that the iPhone uses to make its 18-bit display simulate 24-bit color is also sub-pixel rendering to make fonts appear better on the screen.

The test does not directly compare how text (as in, e-books) looks on the displays, but given that the iPhone simply dithers better, it stands to reason that text will look better there, too.