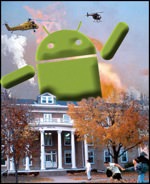 Google has announced via the Android Developers Blog that it is taking a big step up in size limits for apps on the Google Play Store. From now on, the Play Store will support APKs for Google apps up to 100MB in size.

“We understand that developers are challenged with delivering a delightful user experience that maximizes the hardware of the device, while also ensuring that their users can download, install, and open the app as quickly as possible,” says Google. “To support the growing number of developers who are building richer apps and games on Google Play, we are increasing the APK file size limit to 100MB from 50MB.”

To some extent, this is not exactly disingenuous but no big change for seasoned Android users. Most, including me, are now used to downloads in the gigabyte range for bigger games, which add in extra content once the app is installed. The latest Star Wars™: Uprising game on the Play Store, for instance, clocks in at over 530MB. Google gets around this issue through Google Play APK Expansion Files. “Some apps need more space for high-fidelity graphics, media files, or other large assets,” Google explains. “On most devices, Google Play downloads the expansion file(s) at the same time it downloads the APK, so your application has everything it needs when the user opens it for the first time. In some cases, however, your application must download the files from Google Play when your application starts.”

So this isn’t likely to lead to any big shift in user experience on Android devices. If anything, there may be more issues for some users. Google warns that: “mobile devices have limited RAM and storage space. The larger your app or game, the slower it may run, particularly on older devices.” Still, this is one small step in the maturation of the mobile ecosystem, and reflects how mobile devices are pushing up ever nearer to full desktop capabilities and specs.