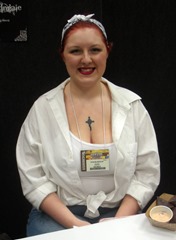 Here’s another interview from GenCon 2013, with self-publishing writer A.G. Howl, aka Amanda McGuire. She is the author of a steampunk pirate romance called The God of Death, available for $5.99 in Kindle or $10.79 in paper from Amazon. She will have a sequel out this month. GenCon was her first convention.

Me: I am here with Amanda McGuire, who writes under the pseudonym “A.G. Howl.” Tell me about your books.

AG: My book, The God of Death, is a steampunk pirate romance. It takes place in a post-apocalyptic world. It is after a great flooding disaster and the world is just starting to rebuild. The novel follows my lead character, pirate captain Jesse Skull, who is the legal executioner for his court. It is also a genetic novel. It’s not just pirates because they’re on a ship, it’s pirates because they have gills and retractable webbing and clear third eyelids. It’s also a romance novel. It has to do with his job being completely interrupted by a woman who just refuses to leave.

Me: Is the book self-published or small press?

AG: It is self-published through CreateSpace on Amazon.com.

Me: I take it e-books are available?

AG: Yes, I have it on Kindle and all that.

Me: How did you get into self-publishing?

AG: I spent a year looking through agents and publishers, and the ones that got back to me were ones I wasn’t really interested in dealing with. So I ended up deciding I could do it on my own.

Me: Has that worked out well for you?

AG: Surprisingly, yes. When I first published, I just thought, you know, it’ll be friends and family, hi, I published a book, come buy it. And now I have actual fans who come up in the grocery store, and they’re like, “Oh, we read your book, we really liked it!” or “I’ve seen you at this book signing, at this library!” So it’s actually worked out better than I thought.

Me: Have you got another book on the way?

AG: Yes, the second book, the sequel to The God of Death is The Nightingale, and it will be out in October.

Me: If a traditional publisher approached you, would you be interested in signing with them?

AG: Possibly. It depends on whether or not I like them. [laugh]

Me: What advice would you have for a beginning writer who has written a book and is looking for a way to publish it?

AG: Consider all of your options. I’m not saying self-publishing is wrong, I enjoy it, but it might not be for everybody. Some people just can’t get out and talk to people and honestly that’s the second, besides writing the book that’s the second hardest thing to do, is push the book. So try it, see what you want to do, and just keep all your options open.

Me: Speaking of pushing the book, I notice a lot of small press and self-publishing authors are here at GenCon. What do you get out of a convention like this?

AG: I honestly thought I’d just come up here, maybe get some new readers, pass out bookmarks and give out candy and just see what happened. It’s my first year here.

Me: Have you done any other conventions, or is this your very first?

AG: No, this is my first convention.

Me: What do you think of the results so far?

AG: I’m super-happy about them, actually. I’ve had buyers and people who are, like, “We’re gonna get this on our Kindle,” and oh my gosh yes, I got a bunch of teenagers who were dressed like steampunk pirates. “All right! Do you have a blog, do you have a word(?),” just, everything!

Me: Do you do a lot of social networking promotion?

AG: Yes, I have. To me it is, since I don’t do them for myself, I do them for pseudonyms, so I have the Twitter and Facebook, and my books on Goodreads, and I have a blog on WordPress, so, I consider that a lot.

Me: So why the pseudonyms?

AG: Because the first two are just the initials for my first and middle name, and “Howl” is because one of my favorite books is Howl’s Moving Castle.

Me: Is there any particular reason you decided to go with a pseudonym rather than your real name?

AG: Not particularly, just because it was almost like I’m starting on blank one and I wanted a name, new everything, clean slate, build on it.

Me: I appreciate you speaking with me, Miss McGuire. Miss “Howl,” I should say.

AG: I answer to either and all.