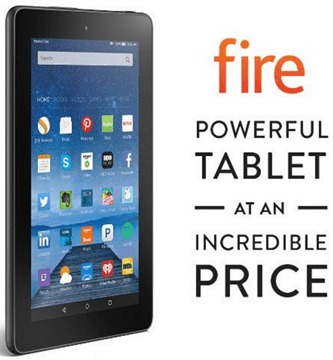 When I think back to the big e-reading events of 2015, the launch of Amazon’s $50 tablet has to rank amongst the biggest stories of the year. Many technophiles appreciate and will pay for admittedly nicer specs than what the Fire offers, but they may not realize just how game-changing this little tablet might be.

Amazon’s current base E Ink model has no glow light, can only read books and is double the price. By contrast, the Fire is a full-fledged tablet that can surf the net, play games, run apps and read books too. It is by far the cheapest entry point into both the ‘e-reader’ and ‘tablet device’ markets. A family can buy a six-pack for every member of the house for about the cost of a single iPad.

Lest I come off sounding like a ‘fanboy,’ however, I should point out point out that my first encounter with the Fire Tablet left me less than impressed with its feature set as a reading device. The screen was a little bit smudgy. The personal documents were segregated into their own separate app. The shopping experience was not as smooth to me as it could have been. I used the Fire tablet more for YouTube viewing and a little bit of gaming.

But it is just such a great entry point for so many potential newbies. I had to give it a fair chance. So I resolved that for a week, I would do all of my reading only on the Fire. And how did my little challenge go?

I did find it was slightly better in dimmer light, for example, when I do my evening reading. I tried to read on the train, and there was very strong sunlight coming in from the window. The glare was at first terrible. But I found that if I kept it on the table and not my lap, I could use my case’s built-in stand to prop it at an angle. and that mitigated the issue. I’ve included a photo of the case with this post.

I am trying to forgive Amazon for this. It’s so, so dumb. And I had to keep remembering to access the books from the ‘Send to Kindle’ tab and not the ‘Cloud’ tab, or it wouldn’t sync with my phone. And that bothered me because I knew that someone like my mother would never, ever remember to do that, and it just seems like such an irritating and obnoxious choice for the user interface.

But then I also recognize that people like my mother are probably not going to side-load books anyway, and they will just read the books they purchase from Amazon. So for 95% of Amazon’s intended market, this large-to-me annoyance will be a moot point.

But it is a large annoyance to me. I devoutly wish Bezos and friends had not done it this way. For most of the week, aside from testing purposes to write this up, it annoyed me enough that I stayed away from the personal books and just read my Amazon stuff, which is, I suppose, the net result the Kindle team was going for anyway. I did it with bitterness, but I did it. So, that’s one point for them.

I have never found a magazine app that wasn’t slow as can be, but I do read RSS feeds, Facebook and a few other newsy-type stuff. That was all fine on here. There was no major difference, to me, between this Facebook or Feedly app, and the one I use on my iOS devices. No complaints!

Could I read on this device forever? Yeah, probably. The personal documents thing is an issue for me because I do have a lot of non-Amazon books. But, looking at this from the point of view of a tablet-slash-reader newbie, there is nothing wrong with this little tablet.

A case that has some sort of stand feature will be a help, if you’re reading in bright conditions. It can almost double the price if you spring for the official one, but I got my no-name one in an Asian market for about $20. If you have such a place near you, they will likely have a generic tablet case you can use.

My E Ink Kindle is still nicer to read on. And since I have it, I am happy to use it until it can’t be used anymore. But I don’t think I would steer the average customer to it if the Fire, which can do so much more and is only a little clunkier, is just so inexpensive. If a person on a budget came to me and said they could only afford one thing, I would have no hesitations with recommending the Fire to them. It’s much cheaper than an iPad. It’s half the price of a Kindle. And it can do nearly everything those devices can do. It’s a good little tablet, and a perfectly acceptable reading device.

Important: Please do not comment on this post until we finish the move over to the new site. Otherwise your comments may be lost during the transition.