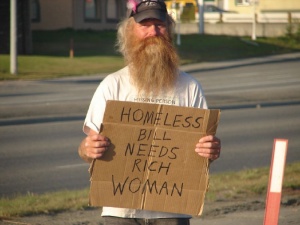 Here is another ‘pro’ argument for the e-book camp: e-books don’t smell.

Obvious? Yes. But the physicality of paper books and the physical spaces which house them can be a surprisingly complex issue.

For example, two local library systems in the Toronto area that have been dealing with…well, patrons who smell.

Of course, to be exact, the problem isn’t the library books themselves, the smell of which bibliophiles may actually love. It’s with certain of the humans reading them.

In Kingston, Ontario, the public library is holding consultations with the public on this issue. How to balance the desire for a pleasant-smelling library experience with the rights of patrons who are homeless or in the shelter system?

The latter may use the library as a home base—both to get out of the weather, and for access to books, computers and information about community supports and services. The library’s policy aims to limit “foul-smelling patrons or those lingering aimlessly.” Librarians ask people to restrict the “belongings they bring inside.”

Meanwhile, in Newmarket, Ontario, the library has actually begun handing out letters to “patrons who have a strong odor.”  The same letters go to heavily perfumed—in other words, not just homeless people.

I do appreciate that e-books, unlike paper books, don’t smell. But with that said, I am not advocating by any means for a world without physical library branches.

Rather, I just see a usefulness in those branches delegating some of the book-checking-out functions to computers. Then librarians can devote more people-time to programs that actually demand a human touch.

I don’t need the librarian to help me check out a novel. But perhaps some of homeless and mentally ill patrons—the ones the Newmarket library was targeting with those letters—might not have known about the community supports available to them.

I would rather see the librarians, in their roles as custodians of information, help people with things like that.

Publisher’s note: Some libraries are bringing in social workers and nurses to help the homeless, and as a former poverty beat reporter, I heartily approve.

For example, social workers can join librarians in pointing the homeless to community resources, including places where they can shower up, in line with Joanna’s point.

Oh, and let’s not single out public libraries. While the problem may not be as bad, fellow bookstore patrons can smell, too.

Also, let’s keep in mind another e-book angle. Some cities hand out cell phones to the homeless; might not some of them come stocked with appropriate books?

Yes, homeless people do read. Perhaps some of the books can even help them find a job in time.

These e-books could be read in a library (maybe even in a special room for the odoriferous consumers of any medium—including heavily perfumed middle-class patrons), a homeless shelter or elsewhere. In fact, Chris reported on a homeless shelter in Indianapolis that has a public free library kiosk and art installation in it.

I know. Plenty of people would simply say, “To hell with the homeless. Just ban them from libraries.” I’d disagree. We could be talking about not just compassion but also self-interest. In today unpredictable economy, the line between the middle class and the poor—including the homeless—can blur a lot more often than it used to. – D.R.

Image credit: Here. The homeless man shown is in Alaska.