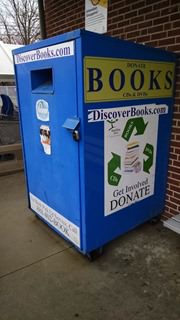 For as long as I’ve been living here in Indianapolis, I’ve noticed this donation box standing at the Kroger grocery store a few blocks away from me. I finally got around to snapping a picture and coming back home and looking “Discover Books” up. It turns out that, for all the sign on its façade mentions “books for charity” (though that may be a sticker someone pasted on after the fact, I’m not sure), it’s a face of one of those for-profit book-reselling outfits I mentioned in November.

As Discover Books explains on its web site, it gets books from thrift stores, library discards, curbside pickup, and its collection boxes, puts them through its automated sorting facilities, and then resells them online “to be enjoyed again”, redistributes them “to support literacy efforts,” or recycles them if they’re no longer of any other use.

The web site is mum on the exact percentages of books it takes in that go to each end, though it notes it has donated over 8.9 million books to North American and international non-profits. It has also recycled over 500 million pounds of paper, keeping it out of landfills. There is a request form where charitable organizations can request books.

I was ready to be indignant about this outfit taking books people donate and selling them to make a profit, but after I thought about it for a while, it occurred to me that Discover Books actually is performing a service that has value, and in that light deserves to make a profit from it. After all, paper books aren’t like e-books; they don’t just magically appear where they’re wanted. Someone has to go to the trouble of getting them there.

And how would the paper books get to where they’re wanted without Discover Books? It would depend on someone wanting to go to the trouble to list them on Amazon or eBay, and package them up and ship them when someone bought them. While some people have managed to make a living that way, it’s not the sort of thing that the average person would want to put in the time or effort to do. And even selling one’s own unwanted books on Amazon or eBay would be a lengthy, time-consuming process—you have to list them, and wait to see if anybody wanted them, and then pack them up and trot them down to the post office.

A lot of entrepreneurs and companies make money by taking on effort that ordinary people don’t feel like doing—whether that’s fixing your car, wiring your house, driving you across town, cooking a meal, etc. Some people prefer to do those things themselves and think people who’d pay someone else to do them are fools, but other people feel their time is more valuable than what these paid services get out of it.

Taking books that could be useful to someone and sending where they will be useful is just another of those kinds of things. If they’re willing to pass some books along to charitable organizations and keep a lot of fully-recyclable waste paper out of the landfills, even better. Nobody’s forcing people to donate their unwanted books to Discover Books. If people have something better to do with them instead, I’m sure they will. But for people who don’t want to be bothered, well, why not? It beats having the books sit around and not do anybody any good.

Perhaps the best thing to take away from this is that there are enough people out there who still read that a company can make money this way—even in the era of e-books and other tablet distractions. 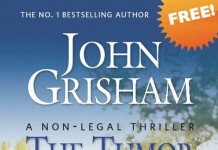 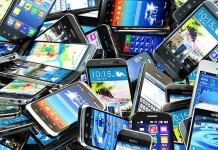 What should I do with my old device? 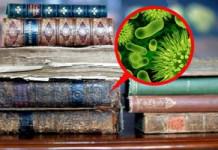 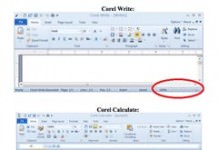