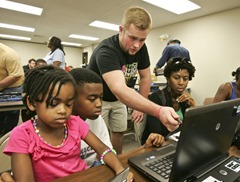 Right as New York City is on the cusp of cutting a $30 million deal with Amazon to provide e-books for its schools, some parents in Huntsville, Alabama are finding that replacing print with digital textbooks for its schools has been more expensive than advertised.

Alabama Today and blogger Russell Winn have looked into costs for the four-year-old digital textbook program. Winn quotes letters from school board representative Elisa Ferrell explaining that a lack of textbook funding had resulted in many of the print textbooks in use degenerating into “a state of advanced age and disrepair,” necessitating a complete update of textbooks at that point anyway. There wasn’t enough funding to do a complete upgrade of printed books, but going all-digital at that point would save a little money and help “catapult our students into the digital age that they will be living in as adults.”

Ferrell explained that sets of print textbooks had been provided to classrooms at the beginning of the program for use by students with vision issues and other problems working with digital. However, over the four years of the program so far, students had become much more comfortable with digital, and as a result they would be moving the physical textbooks out of the classroom and into the schools’ libraries so that students who still needed them could check them out and take them home.

Contrary to the social media and blog traffic, we are not holding some sort of dystopian book burning party somewhere. We are retaining the textbooks, making them accessible, and making it possible for a student to check them out and use them at home. Of course, any student with an IEP or a 504 who has vision challenges, has accommodations in place for those challenges.

Winn is skeptical of some of Ferrell’s claims, noting that between the state of Alabama and the city of Huntsville, the school district has sufficient funding to cover the complete cost of printed textbooks if it wanted, and it could have staggered the upgrades to spread out the cost. He also suggests that some of her claims (such as as when she said one school had previously been using 40-year-old biology textbooks) were pure hyperbole.

When Winn ran the numbers, he found that although the digital textbooks themselves do cost slightly less than buying physical textbooks ($3.13 million as opposed to $3.35 million per year), the cost of buying new HP and Lenovo computers and iPads on which to use those digital textbooks adds almost $5 million in costs, bringing the grand total to a hair under $8 million per year. Rather than saving a little money, it’s actually costing over twice as much.

He also notes there seems to be some disagreement between school board representatives as to whether those print textbooks are going to be kept after all. It might be as few as 10% of them, which means fewer than 10% of students would be able to check them out and take them home.

It’s worth noting that nowhere in Winn’s blog post or the Alabama Today article is there any discussion of the fact that computers and iPads would be useful for a lot more than just reading digital textbooks. They could also be used for educational software, writing and research, and many uses beyond simply displaying textbooks, so tallying their expense only against textbook costs is a little disingenuous.

Furthermore, I think Ferrell has a point when she talks about how much better-prepared for college students who’ve gone through the new digital curriculum have been. Surely helping graduate a class of better-prepared students is worth a little extra outlay, right?

That said, some of the comments show that students are still having problems using the digital textbook. One parent notes that their middle school son does enjoy having a school computer and most of the learning that takes place with it; however, he’s disappointed the paper textbooks are going away because they’re easier to use. The parent writes:

The digital books are not that user friendly. Social studies and science, in particular are difficult to use to find specific information without turning each page one at a time (can’t search for a question or term easily). He doesn’t enjoy the digital version of these at all. They are frustrating to use for normal “answer the questions at the end of the chapter” assignments. He would much rather have a book.

This harkens back to an article I covered last month about some of the usability problems digital textbooks experience in a college environment. It’s not surprising that grade school students would have similar issues. Will more than 10% of the students need to use those paper textbooks? If so, it’s possible another solution might be needed.

Overall, this controversy feels like it has more to do with local school board politics in general than e-books in and of themselves. As they say about academic politics in general, it’s all the more cutthroat because so little is actually at stake. If it weren’t digital textbooks, there would be some other controversy over something else.

Nonetheless, this is instructive in showing other districts the kinds of things they’ll have to take into account when they come to replacing paper textbooks with digital versions themselves. Will they keep some paper copies around for convenience? If so, how many, and how will they be made available?

Sooner or later, every school district in the nation is going to have to face this question. The ones who haven’t yet should probably start paying attention and learning from the ones who have.