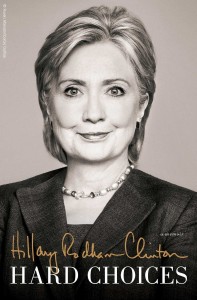 Although “Hard Choices” by Hillary Clinton has been published already in a Chinese translation in the free and democratic nation of Taiwan, complete with front page newspaper coverage, communist Chinese publishers in Beijing have nixed publishing the account of Clinton’s four years as U.S. secretary of state. No English edition will be available in China.

“Hard Choices” has also been removed from the communist country’s Amazon site. “It’s outrageous and unfortunate,” Clinton’s American editor Jonathan Karp said in a statement. “And it’s a pretty clear indication of the low level of intellectual freedom in China right now.”

Well, what did anyone expect? Clinton’s book is critical of the communist Chinese government. She says nice things about Taiwan. See? Beijing doesn’t want its hapless citizens living under the yoke of a tired communism to know the truth about anything, except that the day has 24 hours and a year is 365 days long. In her book, Clinton comes down hard on China’s censorship and propaganda ploys and says the country is at the “epicenter of the antidemocratic movement in Asia.”

Those words are hard to translate in a country where a Nobel Prize laureate, Lui Xiaobo is in jail right now serving an 11-year term.

America, wake up. Your “partner” in Asia is one huge den of lies and contradictions. The proof is in this recent pudding putting Clinton’s book in the remainder bin. Beijing doesn’t like the truth.