I just learned about a Capti-vating new development in text-to-speech. PRWeb is carrying a press release about Capti Narrator, a free cloud-based text-to-speech Windows 64 and iOS app (Android coming soon) that will effectively read aloud just about any DRM-free document.

The press release pitches it as useful with Project Gutenberg (“50,000+ eBooks by Project Gutenberg are Now Available as Free Audiobooks” reads the headline) but perhaps the greater use for it is reading aloud pretty much any DRM-free e-book or other document you have on hand (such as titles by Baen, O’Reilly, etc.), especially if you already have it in the cloud. It will also read aloud news stories or sites you’ve saved to Instapaper—a very useful feature that goes most e-readers one better.

Not only will this be great for people with visual or reading difficulties, the press release also touts it as a way to help learn English by hearing words spoken as they’re read.

Apparently this project has been in development for a while—at least since before the 2011 death of Project Gutenberg founder Michael Hart. The press release proclaims:

“I corresponded with Michael Hart when we were just starting with Capti; he told me that he saw a great purpose in our mission of enabling everyone to listen to all they want to read” – said Dr. Yevgen Borodin, the CEO of Charmtech Labs LLC. “And, today, I am thrilled to finally deliver on my promise and make Project Gutenberg eBooks available as free audiobooks to everyone!”

The app is currently available as a download for 64-bit Windows and a freemium app for iOS. (An Android version is promised soon.) The way it works is that you load your document into it and press play, and it starts reading it aloud to you using one of your system default speech-synthesizer voices. (I found two on Windows, and five on iOS.) If you want other voices, you can add them for prices ranging from $4.99 to $29.99 each. The Windows app launches in a web browser window (though it also runs in your system tray), and the iOS version is its own standalone app. 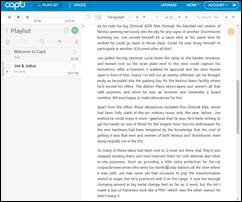 On the Windows version, you can add files to your playlist from a local file, Dropbox, Google Drive, Instapaper, OneDrive, Bookshare, or Project Gutenberg. The iOS app includes this, as well as OneDrive, Pocket, the clipboard, and letting you choose particular pages with the web browser. File types can be PDF, WORD, EPUB, DAISY, HTML, and “many other digital text formats.” I tried it with my e-book Joe & Julius from my Dropbox account and it worked just fine. The ease of uploading titles from the cloud rather reminds me of the way the iOS e-reader apps Marvin and Gerty will read and parse your Dropbox for e-books. 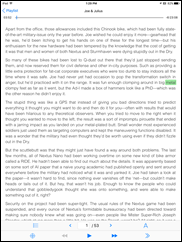 Once you’ve added titles to your playlist, when you hit play, the app reads along with your book, while showing the text on the screen and highlighting it word-by-word. As expected, the result is somewhat mechanical and awkward with cadence and pronunciation of some words (contractions get short shrift: “we’re” gets pronounced as “we-ree”), but probably no better or worse than the text-to-speech functions of the Kindle or any other e-reader or app that supports read-aloud. If you’re used to using those functions, you’ll have no problems with this one either.

Furthermore, after I originally posted this story, Dr. Borodin contacted me and noted that Capti’s premium voices sound a lot better than the system default voices, as the Capti-narrated YouTube video above this article demonstrates. I didn’t actually watch through the whole video before writing this, but now that I do I have to admit that’s pretty impressive. It might actually be worth shelling out some money for one of those voices if you plan to use this system very often.

One other noteworthy aspect of the app is that it incorporates cloud playlist file and position sync. If you tell it to sync the playlist from your desktop, then sync from the mobile app (or vice versa), your Capti playlist has all the same titles in it, and it picks up right where you left off playing them.

The free version of the app will be extremely useful to the majority of readers, but there is also a premium plan available at a cost of $1.99 per month, or $9.99 for six months. It includes a number of extra features such as the ability to view any images that were incorporated in the original document as it is read aloud, the ability to translate words in your texts into any of 28 different languages, a full-text playlist search, and a linguistic game called “Word Challenge.” Though I don’t particularly need those features, I could see they would be very useful, especially to English-as-second-language students. The app strikes a pretty good balance between being useful enough for free and more useful for a slight extra cost—it’s not one of those apps where you have to pay something to get any use out of it at all.

The app could stand to be a little more user-friendly—it was a little tricky for me to find the functions to add titles to my playlist at first, and they’re in different places in the Windows and iOS versions. But once you start reading, it works surprisingly well. The voice is loud and clear, even if I don’t like the artificial way the system version sounds.

I can’t see using this program too often myself—I just can’t get past the artificiality of the computer voice. Though then again, if I buy one of the premium voices like the one that narrated that video I might change my mind. But I know that’s not a problem for many people who swear by it, and were disappointed the latest Kindles dropped the feature altogether. I predict that this free text-to-speech app will find a place on many, many computers and mobile devices.