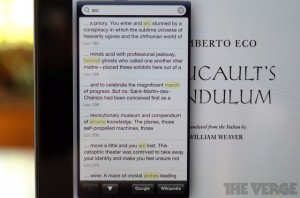 On The Verge, new e-book reader Laura June comes to the same realization as quite a few of her forebears (including me) over the last few years: in emphasized orange all-capital header-sized letters: “e-books are apparently lousy with typos.” She brings up the example of Umberto Eco’s Foucalt’s Pendulum, a still-in-print book by a living author translated from Italian at great trouble and expense, which features a number of c-for-e OCR errors:

I’ve found other typos in other books too, but statistics on this are hard to come by, and since I’ve only been using an e-reader for a few weeks, I don’t have much history to go on. But I’ve asked around a lot and everyone I’ve talked to since noticing this shocking fact has basically said the same thing: in their experience, they’ve seen more typos in ebooks than in their printed counterparts.

She discusses the typo-reporting procedures for Apple and Amazon, and notes that some Amazon devices and applications offer the ability to report typos, but it’s unclear how or whether the typos are dealt with. She is under the understanding that Amazon does not allow publishers to push updates to their books. (Which doesn’t explain how Neal Stephenson’s Reamde famously got typofixed last year. Perhaps it was just egregious enough that Amazon made an exception?) She thinks typo fixing should be a great potential application for crowdsourcing, but there doesn’t seem to be a lot actually happening in this regard.

Of course, the reason behind that is probably the same reason as a lot of the bureaucratic problems that plague e-books—built-in barriers as a result of legacy publishing contracts. Amazon may not be inclined to let publishers push updates (though apparently this may not be uniformly true, given the Reamde thing and this example from 2010), but neither can it make corrections on its own without publisher permission.

It occurs to me that it’s more than a little crazy the e-book market is this far along and there are still all these blatant typos out there. Did early paperbacks have this problem? I can’t imagine any author or publisher wants to have typo egg all over their faces, but in some cases it still doesn’t seem like they’re paying a whole lot of attention.