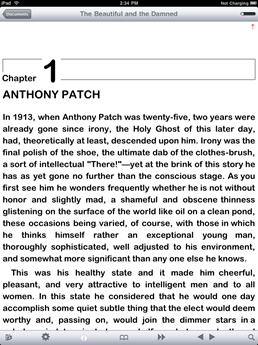 Apple, Kobo and Amazon dissed iPad fans who prefer e-reader apps to be able to bold all the text on the screen—one way to increase LCD readability when you’re outside or if you suffer vision problems.

Stanza, yes, offers the Arial Rounded MT Bold font, but without a so-far-AWOL update, it won’t display full size in high-res on the iPad screen. readMe keeps crashing. But good old BookShelf, one of the early iPhone apps, is out with an iPad-friendly version that offers zillions of font choices, including ARMT.

Going for $4.99, BookShelf reads ePub, HTML, DRM-free Mobipocket, text-only PDF, Plucker and other formats and lets you download from the Web, the “BookShelves” of sites like Feedbooks, Gutenberg, Baen or SmashWords—or from your desktop. A free version, BookShelfLT, stores up to ten books at once.

Alas, BookShelf’s desktop transfer program can be a hassle to set up and I hope that developer Zachary Bedell will check out the simpler transfer technique that readMe uses. How-to videos are nice, but easier transfers would be better.

Disappointingly, too, unless I’m overlooking something, BookShelf apparently won’t let you adjust the margins; please add that feature, Zac, and otherwise work to match Stanza’s versatility, just as your customers are demanding. In places the interface is clunky. What’s more, I apparently can’t annotate or select text for bookmarking. I know—you can do only do much at once. But you might be a natural for funding by libraries or other institutions: I myself can really appreciate what you’re trying to do.

And oh, the positives! For example, via a free Dropbox or Boxnet account, I can get around my problem with the desktop transfer program and enjoy other benefits as well.

In keeping with the name, I could create a customized bookshelf, and I also enjoyed other wrinkles such as the full-screen mode, auto-scrolling, choice of backgrounds, word search, ease of looking up words in a dictionary of my choice (not present but easy to install) or Wikipedia. Were BookShelf not missing features like annotations, this could be a stellar app for geekish Englilsh majors. The potential remains. I’m really rooting for Zac’s app to thrive now that Amazon is apparently hobbling the Stanza team. So give BookShelf a try and spread the word; and if you’re influential in academia or the library world, think about helping out financially if Zac is open to the possibility. Otherwise don’t grip if Amazon eventually swallows BookShelf just as it did Stanza.

Also of interest to iPad users:

—The Atomic Browser—superior to the iPad’s built-in Safari. It offers tabbed windows, the ability to change font sizes and a search engine-switcher so you can use the same term with, say, Wikipedia as you’ve just done with Google—no need to retype. TAB will even pass itself off as Firefox or Internet Explorer or another nonSafari choices. That’s one way to read Gmail in the standard view, although you may not be able to go outside the basic HTML mode. Alas, just like Safari, TAB would not work with Google Docs. Price for the paid version is 99 cents; -a free one is also available.

—The Audiobooks iPad edition lets you listen to more than 2,800 free audio books—classics such as Moby Disk and David Copperfield. Worked great with the start of Picture of Dorian Gray.