Here’s a story about a new augmented reality application to add some electronic features to printed books. Called Booke (pronounced “book-uh”), this iOS application effectively allows you to search, quote, share, bookmark, and annotate a printed book via your phone app.

Booke works by having “Booke Companions,” which are effectively digital implementations of the specific edition of the print book, for the app to use. You load it by typing the book’s ISBN into Booke, which then pulls it up if it exists. The app’s demo video says it works with “all Amazon printed books,” but neither it nor the site are very clear about what other books it covers. There is also no indication of when or whether it will get an Android version.

This is far from the first time someone’s tried fitting augmented reality to print books or newspapers using smartphones. Ubilink tried using QR code footnotes for an edition of Around the World in Eighty Days in 2010, then a month later Ricoh Innovations produced an app that could use regular image recognition to recognize the layout of a given page instead. The month after that, a German newspaper tried something similar.

In 2011, Melville House added QR codes to the backs of some of its print books to link to supplemental material. I looked at some other attempts to extend books via smartphone apps in 2015. 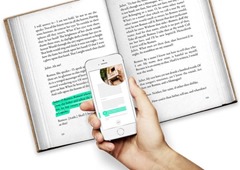 In any event, it’s interesting to see that people are still trying to give print books some of the same advantages that e-books have, while at the same time letting people continue to read them via print rather than through staring at their phone. It remains to be seen how well it will work in the end—but if it does, it would be nice to let print books and e-books coexist a little better.