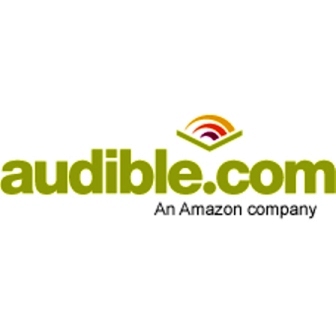 Audible has a great selection of audiobook downloads, and reasonable prices—especially if you buy during one of their frequent sales, using the discount offer for buying them together with certain Kindle e-books, or using one of their monthly credits. But since Audible’s books contain DRM, in some respect they are only as good as their player—which, sadly, is not all that great.

I’ve been listening to a lot of audiobooks lately. It’s something I can do during the parts of my day job that don’t require a lot of brainpower, and it’s fun to hear a good book reading. At first I was listening to some DRM-free titles from my library, using the very same Smart Audiobook Player that Juli likes so much.

But lately I got started rereading the Liaden Universe series, by Sharon Lee and Steve Miller, and given that I’d already bought some of the audiobooks to the series from Audible, I downloaded them to have a listen this time through. The audiobooks have been great so far—narrator Andy Caploe does such a fine job with the books of the main “Agents of Change” sequence that I’m going to be disappointed when it’s time to switch over to a different narrator for other Liaden books—but I’m finding that the players leave something to be desired.

Between Android and Windows desktop, the Android Audible Player is the better of the two. It has some of the features I like in the Smart Audiobook Player—particularly being able to speed up or slow down the books. It’s kind of necessary for the Liaden books, because my one problem with Andy Caploe is that he reads at a really slow pace. I like cranking him up to 1.5x so that it sounds more normal to my ears. And that’s fine, so far as it goes.

However, unlike the Smart Player, Audible’s player doesn’t know enough to jump back a few seconds when you pause it—or when you get a notification sound. The Smart Player takes notifications in stride and jumps back a few seconds after each one. But Audible’s player…just stops. I end up having to set my GPS navigation to mute when I’m bicycling, otherwise I would only hear the book up until I was told to turn my first corner.

What does it have that Smart doesn’t? Well…gamification, for one thing. You get badges for listening to certain numbers of audiobooks in one day, or during specific times, or whenever. It doesn’t really make a whole lot of sense to me at any rate; gamification is best used as a reward for doing something you don’t want to do. But listening to audiobooks is its own reward, so what the heck?

It also has the ability to download audiobooks directly from Audible instead of having to sync them into a directory on your device, so I suppose that’s something. If you’re in a low-bandwidth situation, you can set it to split the audiobooks up for download, so you can just download half of it at a time. It’s not really a great exchange for the features the Smart Audiobook Player has that it doesn’t, in my opinion. 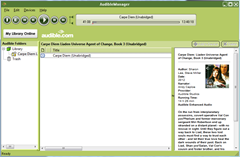 I haven’t used this much, to be honest; it’s missing the biggest feature I wanted in an audiobook player, and without it there isn’t much point. Remember how I said I needed to speed up the audiobooks for them to sound right to me? You can’t do it with AudibleManager. What’s more, you can’t even do it if you play the Audible file via Windows Media Player, which has an option with a slider to change playback speed of audio files under normal circumstances. With an Audible audiobook, the slider simply isn’t there.

Why Audible should think people might want to play their audiobooks faster on a mobile device but not on a PC is a mystery to me. Instead of being able to play them through my PC at work, I end up having to use my smartphone, with earphones at work or plugged into a radio or speaker at home, in order to listen at the speed to which I am accustomed.

And here’s another thing AudibleManager is missing that the mobile app has: a table of contents. The Android app will let you pick what chapter number you want to skip to (though they’re only numbered per individual book file; if you’re listening to the second half of a split book, the chapter numbers won’t match). The Windows version just has an overall progress bar and chapter skip buttons. And you can’t even change your position by clicking on the progress bar—the chapter skip buttons are all there is.

I have a sneaking suspicion that AudibleManager really something of an afterthought, meant mainly for syncing the books across to portable devices rather than actual personal listening via the computer. After all, audiobooks are seen as something you want to do while you’re out and about, exercising, driving, or whatever. So, naturally, they’d be most concerned about making sure you had access to more features that way.

Since Audible puts DRM on all its audiobooks (to Cory Doctorow’s chagrin), these are the only players you can use to listen to them. It’s not such a big deal for e-books, given that most e-readers have generally the same sets of features, but with audiobooks you’re pretty much stuck. It also means I can’t play them through the Axess MP3 CD/flash drive boom box I bought recently, unless I hook my phone to the Aux input jack as if they were simply another set of speakers.

It’s irritating enough that I am seriously considering looking into some way to crack the DRM on these audiobooks, or else seek pre-cracked versions elsewhere of the audiobooks I’ve already bought. I want the authors, producers, and performers of the audiobooks to get their money, but I’m starting to tire of the frustration of dealing with these stupid players that don’t do what I want them to.