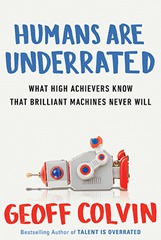 Is the rise of computers in turn breeding a sort of “new romanticism”? That’s what David Brooks suggests in The New York Times, discussing a book by Geoff Colvin, Humans are Underrated.

Colvin argues that improving your cognitive skills is no longer good enough. Simply developing more generic human capital will not help people prosper in the coming economy. You shouldn’t even ask, What jobs can I do that computers can’t do? That’s because they are getting good at so many disparate things. You should instead ask, What are the activities that we humans, driven by our deepest nature or by the realities of daily life, will simply insist be performed by other humans?

It’s interesting to consider how many different things computers are becoming able to do now. It’s a popular theme in science fiction lately to consider what the effect of that is going to be on society. Vernor Vinge’s Rainbows End is such a book. Vinge, who helped popularize the idea of the technological singularity, has been thinking about this a while. In Rainbows End, we see many future citizens are interested in role-playing fiction worlds in real life—they seem to have the freedom to do this as there isn’t as much actual work to be done. As computers become more capable, are people going to become more philosophical?

Brooks believes that tasks focusing on empathy and interpersonal skills, the sorts of things that computers can’t do so well, are the kinds of things that will be more important.

It’s an interesting thesis, but it seems to me the problem with that is that not everyone is going to be that kind of “people person.”

After all, someone has to run the computers.