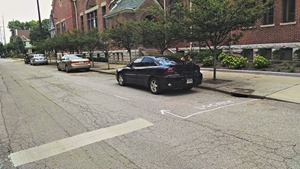 While this isn’t directly about e-books, it’s about a trend I remarked on in April that e-books are related to. We’re getting to the point where we need to own things less and less. Physical media, digital media—even physical items, such as bicycles or cars.

In April I also wrote a piece for our then-sister site, TechnologyTell, about the new BlueIndy electric car hourly rental program (well, okay, “car sharing,” but there’s that word again) that Indianapolis is getting soon. At the moment, it’s planned for a launch in early September, and is accepting membership signups. I signed up today.

The standard BlueIndy rate is $10 per month for a one-year rental, and 20 cents per minute with a 20-minute minimum charge per trip, though they’re throwing in some incentives for the first couple of months like capping up-to-two-hour drives at $10 instead of the $24 they’d usually run. And right now, if you sign up for a year, you can get the first six months free with the coupon code “EARLY BIRD”. Still, it ought to be worth it simply for the convenience. It’ll certainly be cheaper than Uber if I use it often for any great distance.

I also noticed in one of BlueIndy’s news e-mails that they’re planning to put in a rental station literally just half a block away from me, a mere few dozen yards from my “front” door. (The apartment house’s back door is my “front,” since it’s right next to my apartment—which makes the rental station even closer.) I went over and took the above photo, which has the area where the cars will go, next to a local church, marked off with paint.

I don’t expect the people whose regular cars are parked there now will be too happy about losing their parking places. Certainly the owners of various businesses elsewhere in the city that are getting BlueIndy stations put in front of them have been decidedly grumpy about it. The program has been somewhat contentious in general lately in the local City Council, took though I imagine they’ll get that sorted out sooner or later.

Like the local bikeshare program, BlueIndy is going to have a mobile app that will tell you where the nearest stations are and how many cars and vacancies are in each. It doesn’t seem to be available yet, but then, not many things about the program are. Even the kiosks where you’re supposed to sign up only sort-of work, though you can at least pop in and try out video-conferencing with someone in a French call center. It really is remarkable how fully mobile technology has integrated with our lives, hasn’t it? You can navigate where you want to go, find a business, look up reviews, socially network, and even find out where to check out a bike or car, all from the handy little glass and plastic slab in your pocket.

And this is yet another piece of my life that I can get by with renting instead of owning. I already subscribe to Google Play Music for streaming music, and to Netflix, Hulu, and Amazon Prime for video. (I do still buy movies on Blu-ray, because I enjoy the benefit that comes with ownership of digital media for movies I really like, but most of them just aren’t that important to me.)

About the only service I don’t subscribe to, ironically enough, is one of the e-book checkout services, because I don’t really have time to read that many books lately, and too many of my favorite authors are from the big publishers that aren’t part of them. (Which is kind of a lame excuse, really, because I certainly don’t watch enough movies to be getting any good out of Netflix and Hulu either. Or even most of the ones I buy physically.) 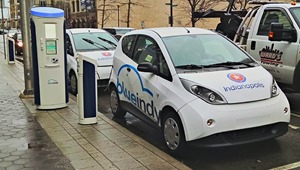 I get by largely without a car now on the strength of my electric bicycle, which allows me to haul hundreds of dollars in groceries back from Trader Joe’s at need. I’ve rented ZipCars a time or two in the past, but they’re too inconvenient by and large to make much use of. And yet, here comes a by-the-hour car rental service that I can not only check out and return at any of dozens of stations in the city, it’s going in right down the block from me.

The nice thing is that, when the rental stations become ubiquitous, I won’t even need to drive the car both ways—I can take the bus to a store near a rental station, buy stuff at the store, then just rent the car to drive it back home. A couple minutes to unload it, and it’ll be back on the charger and I’ll be walking home. Unlike the poor unfortunate souls who are getting displaced, I’ll never have to worry about where to park my car when I’m done with it. (Well, unless the nearest station is full and I have to drive to the second-nearest.)

With a station being so close, the whole thing will be a cinch—far from the ZipCar rental, which is literally miles away at IUPUI, and involved complicated circumlocutions involving bicycling to campus and locking up, renting the car, driving it back, then bicycling home again. Ugh! Thank goodness I’m done with all that now.

It all makes me wonder, is this rental-of-everything habit the kind of lifestyle that needed advanced mobile computer technology to enable? What will the world look like ten years from now? What other things will we decide to rent instead of buy? Will the trend reverse itself and some of these services fizzle as customers realize they want to own things after all? (Insofar as you truly can “own” something with DRM, rather than just “license” it.)

It’s going to be interesting finding out. Meanwhile, I’m looking forward to those BlueIndy cars going in!