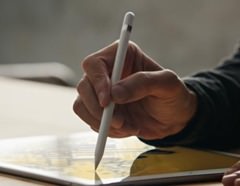 The Apple event yesterday seems to have had just a few major revelations. iOS 9 will arrive September 16, and be compatible with all current iOS 8 devices. Among other things, it will support a new multitasking view called “Slide Over” and picture-in-picture video viewing.

The new iPhone models are the 6S and the 6S Plus, which sport mostly incremental improvements and a heavier case—but still come in 16, 64, and 128 GB formats, rather than bumping the 16 to a 32 that would make more sense given how many megapixels their cameras have (12 and 5 in the newest model) and how many pictures people take now.

Apple is also giving the Apple TV another bump and positioning it as a game console rather than just a media streamer, though the more expensive consoles probably have little to worry about.

But the biggest news of the event probably centered around the new iPad Pro and its Smart Keyboard and Pencil accessories. The iPad Pro’s 12.9” screen seems made with media consumption and production in mind, especially given the optional accessory of the Pencil.

I’m going to guess that e-books probably won’t be a major draw for a screen that big, given that it’s larger than even most hardcover books and the trend seems to be toward reading e-books on smaller screens rather than larger. Nonetheless, the kind of PDFs that you previously needed a computer screen to view will look nice in that size and resolution, especially since it will be easier to view in portrait than many computer monitors. And it might be good for people with weaker eyesight, with the bigger screen area giving large-print books room to display more text.

The Pencil’s announcement met a noticeably cool reception at first, largely a reaction to its name, but it actually comes off as a fairly impressive feat of engineering. Thanks to multiple sensors in its nib, the pencil can draw extremely fine lines, but can also detect pressure and tilt in order to know when to thicken the line.

It is also, notably, a device Steve Jobs said Apple wouldn’t make, because he felt styluses were unnecessary and simply existed to get lost. But technology has marched on since Jobs made that pronouncement. (And it’s not as if Jobs remained consistent with himself back when he was alive, either—after first pooh-poohing the idea of e-books, he proceeded to orchestrate a major price-fixing conspiracy ensnaring five of the Big Six publishers in order for Apple to launch them.)

And it brings to the iPad a capability that digital artists have long wished for in their Wacom tablets—the ability to draw directly on a screen, rather than stroke a stylus against a touch-sensitive surface while watching lines appear on a separate screen. The prior iPad drawing tools simply didn’t have the fine degrees of control that a Wacom could offer, but it looks very much like the Pencil does.

In the end, Apple really didn’t announce a whole lot that was totally new—many of their innovations are things others have done before. But many of them are things Apple hasn’t done before, and Apple fans will be quite excited to see them emerge.