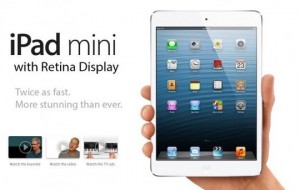 Since Apple’s first mid-sized, mid-range tablet has proven to be such a booming success, no one really doubted an iPad Mini 2 coming sooner or later. But the exact ETA of this new slate has always been the big question mark. (Well, that … and the specs and the pricing, of course.)

Unfortunately for us (and fortunately for the tech giant), Cupertino has managed to keep a very tight lid on iPad Mini 2-related rumors, so here we are, eight months after the first-gen’s release, with nothing of substance known about the follow-up. And by “known,” I mean intel revealed by a solid, reliable source. Heck, even a suspicious photo would do at this point.

That being the ensemble picture, we’re left hanging to threads. Like a new report out of Taiwan, which claims Apple has had to push back the iPad Mini 2 release due to Retina display shortages.

Do we have any proof to confirm that? Of course not. Is the source of the rumor trustworthy? Yes and no. It’s an economic newspaper, not an obscure blog, but that doesn’t really mean what it used to back in the day.

Oh well. If we are to take the report for granted nonetheless, it appears the second-gen iPad Mini will see daylight in early 2014, instead of the initially planned ETA of Q4 2013. Aside from the predictable display resolution bump, chances are the slate will pack a faster processor than its predecessor too, but that’s about all we know right now.

Anyone buying the rumor?