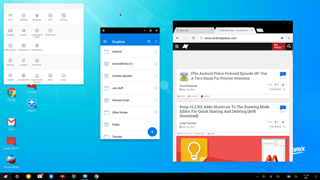 Hot on the heels of our story about potentially useful Android N features for e-reading comes this tantalizing tidbit from Ars Technica suggesting Android N might not merely support split-screen mode, but might also have a “freeform mode” in which apps could inhabit multiple windows on the home screen.

The new feature isn’t enabled yet, so there’s no way to preview it at the moment. It’s even possible it might have to wait for Android O, given that split-screen mode was first seen in M’s developer preview but then removed along the way.

But if it does end up coming through, this “freeform mode” would probably be most similar to the multi-window displays seen in the Android-derived Remix OS (pictured above), or Samsung’s 18” Galaxy View Android tablet which can only be used in landscape orientation. It would effectively give Android window moving and resizing capabilities similar to those of Windows desktop.

But if it’s Google itself doing it, such a mode could well bypass some of the awkward limitations on multiple-window displays that Remix OS exhibits, because its version of Android wasn’t truly meant to be used in windowed mode. Can Google make a version of Android that is?

Of course, you’d probably need to have a pretty-good-sized device to get the most benefit out of that, even with Android N’s scalable displays. Something on the order of the 18” Galaxy View would seem about right. This in turn leads me to wonder whether whether Google might be interested in a foray into outsized tablets or tablet-like devices like the Galaxy View.

It would seem to be a niche that isn’t currently being filled—a more portable and significantly smarter “smart TV” that could be used for media viewing and light computing tasks. Even if Google itself isn’t planning on it, perhaps other tablet manufacturers might. That would certainly be an e-reading-capable device.

Of course, even if Google isn’t planning to make that kind of tablet, rumors have run rampant about it merging Android and ChromeOS to make a new desktop operating system. Adding native multi-windowing seems like a necessary step along the road to such an OS.