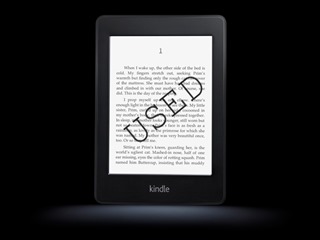 Amazon has shown an interest in allowing customers to resell digital content before. In 2013 it received a US patent on the idea, applied for in 2009. Now, according to The Digital Reader, it is in the process of obtaining one in Canada as well. The Canadian patent was filed in 2011, but has yet to be granted—Amazon is still going through the paperwork process for it.

The patent has to do with lending, referrals, and reselling, and seems fairly similar to the US version. It talks about allocating a portion of the proceeds for sales or lending to rights holders, and so forth. It’s all very interesting, but the questions that the US patent raised in 2013 still apply: what on earth could Amazon be planning to do with the technology?

As much as publishers hate the physical-goods resale market, it’s hard to imagine them being happy about Amazon doing that with their digital goods, too. Of course, Amazon has enough self-published and Amazon-published works that it could still build some kind of a resale market without them, much as it has built its Kindle Unlimited largely without them. It’s also possible that Amazon could be planning to use them defensively, to try to shut down any other company that tries to resell used digital content, but given that none of those have ever really gotten anywhere it seems unlikely.

There’s also the little flaw that it’s still possible for someone to crack the DRM and make a copy of the book, then resell it—just like it’s simple to crack DRM on downloaded library e-books and keep a copy of them. It may not be so much of a concern for library books since no money changes hands, but that could be a sure killer for a digital resale market. ReDigi claimed that its patent covered a way to prevent that, but it’s unclear just what that way was or how easily it could be defeated.

In any event, digital resale versus first sale rights has long been a contentious issue, as shown by the House of Representative hearings looking into the matter in 2014. As I said then, it seems unlikely that digital resale could be implemented in a way that would effectively protect the rights of the publishers and authors. That seems unlikely to change, Amazon patents or not.

But then, we honestly have no way of knowing why Amazon wants these patents. It might not actually intend to use them at all, or it might see having them as a useful contingency should reselling digital content be found or legislated to be lawful. The only thing we know for sure is that Jeff Bezos apparently sees them as worth spending Amazon’s time and money to acquire—not just in one country, but at least two. Any attempt to work out why would necessarily involve tarot cards and tea leaves.