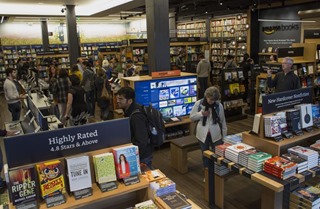 Ah, the good old-fashioned Appeal to Emotion. As fallacies go, it can be fairly blatant. The latest example of this I’ve noticed is in the Seattle Times, where Indigo Trigg-Hauger spends a whole column arguing that Amazon can’t ‘replicate’ independent bookstores, because Amazon sucks but independent bookstores rock. Well, all right, I’ve necessarily condensed the arguments a little, but that’s basically what it boils down to.

Lines like “The experience of an indie bookstore just can’t be bought” or “People are unique. We don’t want to feel like another data point, another sale in the machine that tells the company how many books to buy” give you a clue of the type of argument to expect. There’s not really anything there to argue against—it’s just a venti-sized shot of sentimentality designed to hit you right in the feels. It’s first cousin to the famous “smell of books” complaint against e-books, and makes about as little sense.

She’s mainly talking about that new outlet bookstore Amazon opened in a Seattle mall, inveigling against its dreadful practices such as facing all the books out or using data gathered from Amazon.com to make recommendations. (Why, those cads!) And her description of Amazon Books as some kind of cold, soulless wasteland doesn’t even make sense if you look at some of the photos of the place.

She does get one thing right, though—in the last paragraph, where she suggests,

The draw of the Amazon bookstore is not the experience, it’s the price. And why would you go to their physical location when you could get that from the guilt-free comfort of your own home?

That’s exactly right! You can get those prices from “the guilt-free comfort of your own home.” That’s what Amazon.com is all about. (Though why you’d be “guilt-free” in her book if you’re ordering from Amazon rather than going out to one of her hallowed indie bookstores is beyond me.)

And I have rather dreadful news for Miss Trigg-Hauger—Amazon already has replaced independent bookstores for my parents, and undoubtedly many other people like them. Instead of having to travel miles and miles from their home in rural Missouri to reach the nearest independent bookstore, then browse through possibly-poorly-sorted shelves in the hope of finding something they want, they can now search for books they want on Amazon.com from the comfort of their own home, and get many of them second-hand as cheaply as a single penny plus shipping (because even with the shipping, they’re still much cheaper than buying new). Sure, they don’t get the experience of going to an indie bookstore, but they’d a lot rather be at home than out somewhere having an “experience.” This is why they do all their Christmas shopping via Amazon, too.

The question of whether they would visit an Amazon bookstore is academic, given that they live nowhere near Seattle, and Amazon probably isn’t coming anywhere near them any time soon. But then, that also renders Trigg-Hauger’s column largely irrelevant for the 99.99% or more of the American book-buying public who also don’t live anywhere near Seattle. Or at least premature—there’s no sign Amazon plans any sort of large-scale expansion into other malls across the country.

In the end, it’s just another hatchet job by an Amazon Derangement Syndrome case—and not a terribly coherent one, at that.