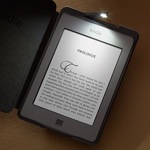 Notes about the new Kindle Touch 3G
The product page presentation begins with the feature that differentiates this device from the Kindle Touch (WiFi only):

As with the older Kindle 3 with 3G (now called the Kindle Keyboard 3G),  it has Text-to-speech (TTS) , can read audio books and play mp3’s, including podcasts

All Kindles can borrow from public libraries now.

I’ll be pointing out only differences between the older and new model offering 3G, as it’s easy enough to see what Amazon offers by just going to the Product page for the Kindle Touch 3G.  I very much recommend readers take the time to slowly go over that page.

Points to keep in mind, on this touchscreen Kindle:
You can tap (“no need to swipe”) to turn pages, so Amazon points out you can hold the Kindle in either hand.

Speed. Even the Kindle Basic ($79 to $109) has been praised (it’s already shipping) for its noticeably faster page turns and speedier processes in general, over the older keyboard models.

A new feature named “X-Ray” is available on the new Touch models and Amazon explains it this way:
“Explore the ‘bones of a book.’ With a single tap, see all the passages across a book that mention ideas, fictional characters, historical figures, places or topics of interest, as well as more detailed descriptions from Wikipedia and Shelfari.”

They reiterate that Amazon is providing “free cloud storage for all Amazon content” (meaning content you purchase from them — music, video, as well as books).

Battery Life: Amazon used to base battery life on a rational 1 hour per day usage, but ever since
Barnes and Noble decided to base theirs on only 1/2 hour per day usage, and columnists picked up BN’s results without looking at what daily usage it was based on,  Amazon has now changed its basis for
calculations, to match the 1/2 hour per day that Barnes and Noble apparently feels its users spend on books.
So now, 2 months between charges  (with Wireless Off)  is claimed rather than 1 month.

(I’m a Barnes and Noble card-carrying paid-member and am enjoying a NookColor, but this battery usage thing is for the birds, and I don’t mean Angry ones, just BN’s idea of disinterested ones.

I’m really glad that Amazon is keeping the Kindle Keyboard models active, as there are many who still prefer even a clunky physical keyboard to a touchscreen one. The Kindle 3 (Kindle Keyboard) has been known for its beautiful screen contrast, moreover.

Amazon has more to say on the special features in the lower portion of their page, which may receive less views, so I’ll add some of it here

New Touch Experience – EasyReach
“Amazon invented a new type of touch experience that eliminates the fatigue caused by continuously swiping to turn the page, and that allows readers to hold Kindle with either hand while still turning pages comfortably

Page turns and other navigation with this model:

Tapping on most of the screen area will page forward,
the most common action done when reading;
tapping in a narrow area near the left edge of the device turns to the previous page; and
tapping on the top part of the screen brings up the toolbars for further options.”

Support for Non-Latin Characters
This hasn’t changed since Kindle, but it bears repeating here:
… Kindle Touch displays Cyrillic (such as Russian), Japanese, Chinese (Traditional and Simplified), and Korean characters, in addition to Latin and Greek scripts.

Full Image Zoom
(I miss this feature in reading normal books on my NookColor and it’s said that the Adobe DRM format
for ePub has something to do with the limitation on that unit, which is otherwise very capable.)
“Images and photos display crisply on Kindle Touch 3G and can be zoomed to the full size of the screen.”

Real Page Numbers
Again, many still don’t know about this newer feature, which is on Kindle 3’s as well.
“Easily reference and cite passages or read alongside others in a book club or class with real page numbers.  … we’ve created algorithms that match specific text in a Kindle book to the corresponding text in a print book, to identify the correct, “real” page number to display.

Available on tens of thousands of our most popular Kindle books, including the top 100 bestselling books in the Kindle Store that have matching print editions.
Page numbers are displayed when you touch the top of the screen. (On the Kindle 3, it’s done by pressing the Menu button.)

Carry and Read Your Personal Documents
Few know about this feature, which is getting even more support now.
“You and your approved contacts can e-mail documents – including Word, PDF and more – directly to your Kindle and read them in Kindle format.  Delivery via Wi-Fi is free; there is a small fee for delivery via 3G – see details.

NEW TO KINDLE 3 AND NEW E-INK KINDLES
“Your personal documents will be stored in your Kindle library on Amazon and ready to download conveniently anywhere at any time. You can add notes, highlights and bookmarks, which are automatically synchronized across devices along with the last page you read using our Whispersync technology.”
(Nate Hoffelder (and Felix Torres) had first noticed this by viewing the ManageYourKindle webpage source code and noting variables for pdocs and archiving.)

ALSO, as has been true for well over a year, “You can read your PDFs in their native format AND convert them to the Kindle format so that it reflows like a regular Kindle book”

Personal Kindle Book Lending
Besides public-library lending, already mentioned, “each eligible book (eligibility determined by the publisher] can be lent once for a period of 14 days.”  [Publishers have held B&N to the same personal-lending rules]

Special Offers and Sponsored Screensavers
This applies onlly to the “Special Offers” Kindle models, in this particular case the $149 Kindle Touch 3G.
Special offers are received on the unit, which also has sponsored screensavers seen only when not reading.
Examples:
• $10 for $20 Amazon.com Gift Card
• Save up to $500 off Amazon’s already low prices on select HDTVs
• $1 for a Kindle book, choose from thousands of books

Audible Audiobooks
As with previous models, you can listen to Audible books with the Kindle Touch 3G (as well as play mp3’s).

DECISIONS
For those who are having a difficult time deciding on which of the many Kindles to get, be sure to see the “Compare Kindles” table on that product page, which comes with images of each model. I haven’t had time to give the WiFi-Only version of the Kindle Touch a thorough look yet, but the two devices should be the same except for the 3G module

If you have any questions on what you see in that table, please feel free to ask here, and you can also visit the Kindle Community forums where there is always help from other customers 24/7.